Aquatinting is the process in which an etching plate is lightly sprayed with enamel spray paint and put into an acid bath. The acid chemically reacts and etches away the areas between the particles of spray paint, leaving a pitted surface. The pits will hold ink, which become the grays and blacks of the printed image. In contrast, the areas covered by spray paint particles resist the acid, remain smooth and will not hold ink, leaving these areas white when printed. An aquatint has a pattern of small black and white dots, giving a grainy feel. Aquatints can be manipulated in many ways and is my dominant etching technique.

A good aquatint leaves a stunning print surface that no other process can duplicate. It requires experience to execute properly but even when done correctly, the constant pressure from running the plate through the press will compress and wear down the aquatint, causing it to print lighter and lighter. A well done aquatint will hold up for at least 30 prints and usually many more. A good understanding of the process is necessary to maximize the technique and reduce unwanted results.

For my own etching process, I use 16 gauge zinc plates and nitric acid that’s one part acid to eight parts water. I prefer Krylon flat black enamel spray paint for the aquatinting. It’s a quality spray, adheres well to the zinc plate and is easily removed with alcohol. Other etchers use copper plates and different methods to aquatint, such as rosin. I do not use these materials or techniques.

My etching process is incremental — I work on different areas of the plate step by step, like a puzzle. I typically do the darkest aquatints of the plate first, as this gives form and shape to the image. I start by determining which areas of the plate are to be aquatinted. The areas that are NOT to be aquatinted are stopped-out with asphaltum and left to dry. The stop-out acts as an acid resist and lets me concentrate on the aquatinted areas only, leaving the stopped-out areas to be dealt with at another time. Once the stop-out is dry, I put the plate on a flat surface and spray back and forth from about 18 inches above and slightly to one side. It’s very important to sweep across and slightly beyond the plate in a constant motion to give an even aquatint. Occasionally the spray turns out uneven or spotty; when this happens, it can be wiped off with alcohol without affecting the stop-out and then re-sprayed. I always spray outside as the paint fumes are too noxious for indoor use; some studios have indoor ventilated booths for this purpose.

(All diagrams are for illustrative purposes; the actual spray paint particles will be randomly spaced and not precisely spaced as shown.)

When printed, it will give a speckled but even look — the aquatint will print 50% black (the ink from the pits) and 50% white (the unetched, smooth surface area where the spray paint particles were, which do not hold ink). Etching for 3 minutes will cause the acid to eat much deeper into the plate, leaving deeper pits which hold more ink. The 3 minute etch will print much darker than the 1 minute etch.

Spraying the plate longer will give about 75% plate coverage, with 25% of the plate left exposed. When etched in acid, a side diagram would look like this:

When printed, the 75% plate coverage will be lighter than 50% coverage, as white is a larger proportion of the aquatinted area.

The minimum recommended plate coverage is around 50%. Anything less may not hold up under the constant pressure of printing. For example, the diagram below is 25% plate coverage:

With 25% plate coverage, the unetched areas are few and far between. They look like stalagmites so that’s what I’ll call them. When the plate is run through the press, the pressure from the roller will cause the stalagmites to erode or break off, which compromises the aquatint. The deeper the aquatint, the more isolated and fragile the stalagmites, the quicker they will wear down or break. In contrast, with 50% or higher plate coverage, the unetched surface areas are in much greater quantity, forming a collective cushion to help absorb the pressure and reducing overall wear.

An aquatint can also be varied to give it shape or depth. For example, if the aquatint is briefly etched, it can be removed from the acid and some areas can be stopped-out. The stopped-out area will print light gray. The remaining aquatint can be etched longer and will print a darker gray. This can be done a number of times, with each subsequent aquatint printing darker than the aquatint before.

Below is a demonstration print that shows the effects of different plate coverage and time etched. The acid I used was fairly new, so it etched quickly and gave dramatic results when printed. Older acid will etch slower and the aquatints will be lighter when printed, so it’s important to know the strength of the acid as it will definitely affect the end result. 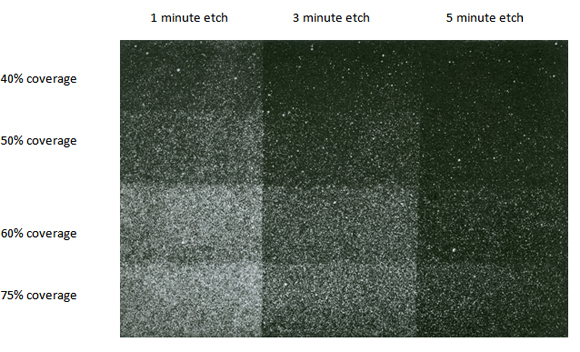 Re-aquatinting leaves a more mottled effect than the first aquatint when printed, which can be quite effective and can be used to contrast with other aquatints on the plate. Additional re-aquatinting will further etch away the surface, leaving fewer white areas when printed and further deepening the pits. If there is enough re-aquatinting, all the white surface areas will be etched away and the pits will be etched even deeper, leaving a very black tone when printed. On the negative side, if not done correctly, re-aquatinting can lead to the stalagmite problem that was discussed earlier.

Another method to darken an aquatint is to use a hard rubber roller and lightly roll a layer of stop-out over the aquatinted area. The stop-out will cover the surface area and not the pits, which will allow the pits (and not the surface) to be etched deeper. The plate surface from the first aquatint will remain unaffected. A variation of this is to rub the aquatinted area with a litho pencil, which will similarly cover the surface and not the pits. Litho pencils leave line patterns when used, so I carefully check the plate surface before I etch to make sure it’s what I want, or else an unwanted pattern will be etched into the plate.

If the aquatint prints too dark, it can be lightened by rubbing the surface with a burnisher. This has the effect of pushing the plate surface down, which makes the pits shallower and reduces the amount of ink the pits hold when printed. The more the aquatint is burnished, the shallower the pits, the lighter it will print. The aquatint can also be modeled by burnishing in some areas more than others, giving the illusion of shape or depth. Spreading several drops of 3-in-1 oil on the surface will make burnishing smoother. I’ve also used steel wool instead of a burnisher to lighten the aquatint.

The best way to plan for an aquatint is to do a test plate first. I place the test plate and the working plate side-by-side and spray both at the same time. This gives both plates the same plate coverage. I etch the test plate for different time intervals and print, similar to the demonstration print above. This gives me a very good idea of how long I need to etch to obtain the desired result. I can then apply the results towards the working plate.

The etching below is titled “Latimer Street Between 15th and 16th” and it’s one of my favorites. It’s a side street in Center City Philadelphia that is lined with tall buildings. It’s winter and the sun only touches the street for a short time during the mid-day. Light coldly bounces off concrete and steel surfaces. It’s a dark print (but with plenty of lights) and it illustrates what good aquatints can do. 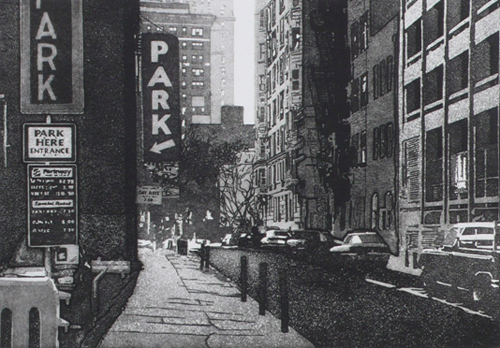 Below is a breakdown of the aquatinting techniques: 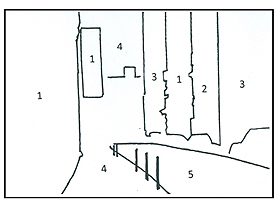 Areas 1 and 2: The rich dark grays and blacks were achieved through deep, multiple aquatints. If not done correctly, multiple aquatints (area 2) can break down and cause bad tone — fortunately in this case, the bad tone is small in size versus the other dark aquatints. In fact, the difference in tone and texture contributes to the overall visual vitality of the dark street. This is an unusual example of a bad etch that works to the print’s overall advantage. Sometimes I get lucky.

Area 3: Two buildings on the right side of Latimer Street have shiny surfaces and dark windows. The windows are dark aquatints, similar to the aquatints in Area 1. The shiny surfaces were done with a short single aquatint with about 60% plate coverage. This gives a clean light gray tone that suggests sunlight bouncing off the concrete surface. The building on the far right was done with higher plate coverage and was etched deeper to give a darker light surface.

Area 4: The background buildings are in the sunlight and were achieved through a single aquatint with 60% plate coverage. The most distant building was done with a very light etch. The building in front of it is the same aquatint but etched longer. The sidewalk is also a light aquatint that suggests the reflective quality of concrete. The sky was not etched at all, so there’s a gradual lightening of the grays and blacks from the foreground leading to the distant white of the sky.

Area 5: The street was done with multiple aquatints. It has a rich dark tone. The far end of the street lightens as it gets closer to sunlight, so I burnished that area so it would print lighter. The street has a very gritty, macadam-like feel which contrasts nicely with the smooth aquatints of the sidewalk and building surfaces. The final touch was to put in the sidewalk posts with a very dark multiple aquatint. This subtly cuts up the direction of the sidewalk and street and reinforces the verticals of the buildings. To me, the sidewalk and street pull the picture together — lights and darks, side by side, completing the picture.